The major orthopedic players continue to manufacture in-house at a higher rate than other industries.  Because they have no robust alternative for outsourcing to companies unable to absorb the volume. In the first part of this interview Ali Madani from Avicenne Medical suggests the need for bringing structure to the CMO sector.  Other key issues include: 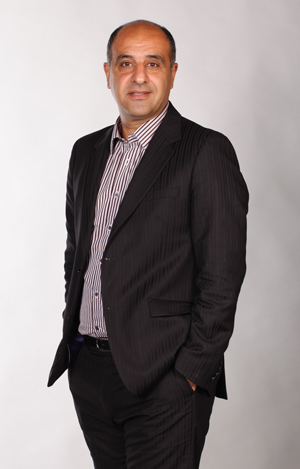 The market for orthopedic implants can be seen as mature with basic products that have reached the commodity stage of competition. Yet the orthopedic industry itself is relatively young, having emerged only 20 years ago, according to Ali Madani, the founder and managing partner of Avicenne Medical.

From this point of view, he says, the constant consolidation among contract manufacturing organisations (CMOs) over 15 years can be seen as the normal and healthy development of an industry in its adolescence. And like a teenager, we can expect to see continued, even faster expansion as this vital segment of the orthopedics industry strives to realize its full potential.

Ahead of the IMPLANTS 2017 conference on June 8 in Paris, Madani focused in this interview on a study of trends in outsourcing of product manufacturing by major orthopedic companies and he shares his perspectives on how the CMO market needs to evolve, and quickly, to capture a vast opportunity.

IMPLANTS: We have seen a non-stop expansion of a few major CMOs, Is there no end in sight?

Ali Madani: There has been a tremendous concentration among CMOs through acquisitions. Industry leaders like Tecomet, Orchid or Greatbatch have been built over 15 years by an aggressive acquisition of smaller contract Manufacturers. In fact, these companies are responding to a generalized and global manufacturing trend where the major OEMs [original equipment manufacturers] are pushing for more and more outsourcing of production.

IMPLANTS: Yet at the same time the major OEMs continue to expand their in-house production.

Madani: Because they have no choice! Because they do not see enough robust solutions coming from the CMOs to meet their needs. The players in the CMO space today are not structured enough to meet the real opportunity coming from the OEMs.  Yes, we have seen Tecomet, Orchid or Greatbatch, now called Integer, growing year after year through acquisitions, and we can expect this trend to continue, not only for the major players but among the medium-sizes CMOs as well. 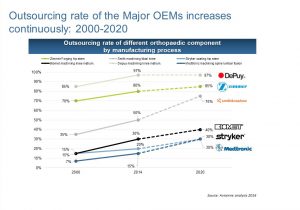 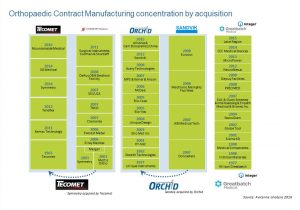 This should not be surprising in such a young industry.  We have seen this development trend in the aerospace industry and among outsourcing companies in the automotive industry. In fact, companies like Symmetry, Tecomet and Orchid actually came from these industries! They entered the orthopedic space a little at a time as they saw the market opening and then growing rapidly, continually expanding.  To that point the major orthopedic OEMs had no choice but to manufacture their products internally.  Progressively they began shifting a portion of manufacturing to these external companies.

We can expect this trend to continue, even accelerate as orthopedics follows the same road as automotive and aerospace.  We believe the outsourcing rate of different orthopaedic companies will increase continuously.

IMPLANTS : What do you mean when you say the CMO space today is not structured to meet the real opportunity?

Madani: Look at it from the desk at Stryker, Zimmer-Biomet, DePuy or any major OEM:  They don’t want to contract out their production piece-by-piece to many different manufacturers. They would prefer to have a limited number of suppliers, a one-stop shop if possible, the way it works in the automotive industry, or in the aeronautics industry. There, a major like Renault or Boeing can turn to several suppliers certified to be Tier One companies capable of handling the volume and quality.  In turn these suppliers can turn to companies certified as Tier Two. This is what we can call a structured industry. And it is not what we see in the orthopedics industry.  Zimmer Biomet, DePuy and Stryker do not have this kind of resources among their suppliers.  It remains an unstructured sector.

IMPLANTS: And this is where we need to go in orthopedics?

Madani: We believe this is the opportunity. We believe the acquisitions, expansion and consolidation among suppliers and CMOs will continue in the future to give birth to a new era for CMOs in orthopedics. When the CMO market becomes structured enough, it will create a vast number of new opportunities for the major OEMs.  We are already hearing the first signs of this structure with CMOs being called Preferred Suppliers or Strategic Partners by the OEMs.

Manufacturing is not the core business for major OEM companies. In the long term, the OEM players would like to be focused only on the design and development of new products and then the sale and distribution of those products. But not on the manufacturing of products. This is what we see today in the automotive industry where up to 70% of production is external. This is where we should be moving in orthopedics.

IMPLANTS: How « vast » are the opportunities for CMOs?

Madani: This depends on how “organized” a CMO wants to be, its vision for playing a role in the industry.  For example, it is not hard to imagine a major OEM divesting itself of certain manufacturing operations.  The moment that a major manufacturer is able to divest itself of a facility, to someone capable of managing it, they will do it. We have already seen steps in this direction taken by DePuy, Stryker and Medtronic.  It can become a heavy trend, especially for the segment like the casting. 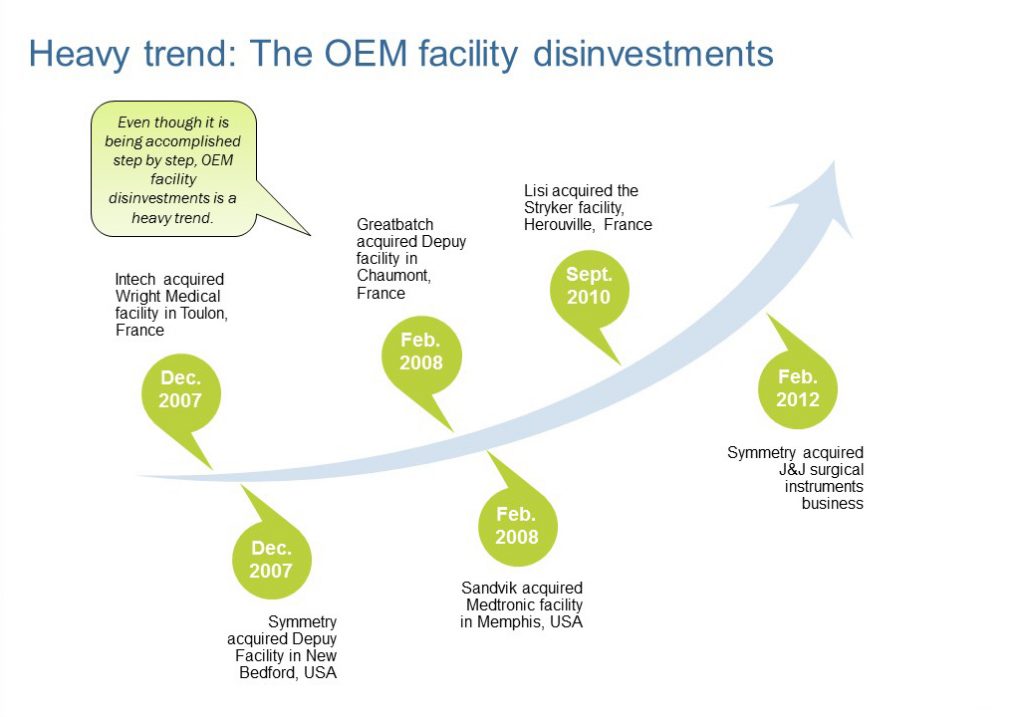 There are other things that a CMO can do to be a strategic supplier. Today, the major automotive companies work with auto part makers who offer very strong R&D departments that can bring forward innovations to propose. The supplier brings new technologies, novel capabilities that can improve product design and share some regulatory and quality issues.

To reach this level of structure, CMOs need to expand, to grow. Yet restructuring the CMO sector does not always mean a company needs to be bigger. CMOs can also expand their offering to OEMs by acquiring and enhancing their skills and expertise.  The best example would be in partnering on the regulatory burden, to be able to say to major clients that they can also take a share of the regulatory issues, demonstrate to major customers that they can handle these matters. There is also the potential for CMOs to share a portion of product risk with OEM customers.

In other words, to be a strategic partner, the CMO needs to help bring a product to market, to participate in the project, to even completely manage aspects of the project.

Read the second part of the Ali Madani’s interview here.