All the major companies have entered the Ortho Race for Robotics with massive investments.  The former head of Zimmer-Biomet’s newly created center of excellence for its robotic development, Bertin Nahum, tells us about his view of: 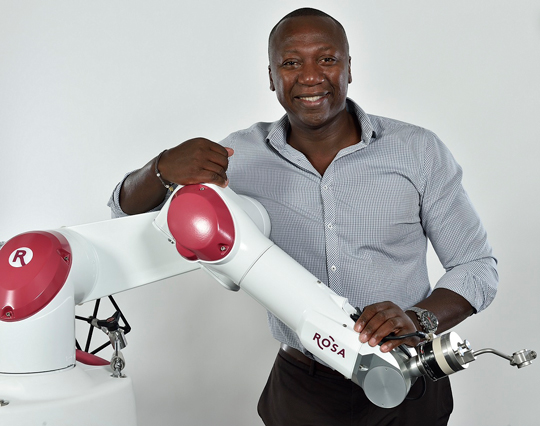 Given a choice, patients will opt for minimally invasive surgery (MIS) every time.  The pull is so powerful that men will switch hospitals just to have a daVinci robot from Intuitive Surgery assist with a prostatectomy.

According to Bertin Nahum, who headed robotic development for Zimmer-Biomet, orthopedics implant manufacturers should pay close attention to what happened when a robot entered the field of urology. Where until recently surgeons cut a man open for prostate gland resection, today in the United States 90% of these procedures are minimally invasive with robotic assistance.

Nahum could not be tempted to predict the impact robots will have on market share in orthopedic surgery. A general guess has no real value, he said, and the sector is too fragmented across specialized segments and across geographies for a fine-grain projection to be practical.

Yet he is confident about what it will take to win with a robot capable of equally the daVinci success: patient benefit.

« Surgeons are not going to move to robotics just for the sake of having a robot », Nahum told us. « They will do it because surgical assistance enables a more rapid adoption of MIS for the benefit of patients. People do not use technology for technology, they use it because it is enabling something else, to perform safely and consistently these MIS procedures, to reduce uncertainties and risk. »

Nahum is an early winner in the newly launched Race for Robotics in orthopedics.  In July, 2016 he sold to Zimmer-Biomet the company he founded in 2002 for designing medico-surgical robots. Following the acquisition, he was named the head of robotics for Zimmer-Biomet, which created a new division built around the Medtech SA team in Montpellier, France.

« This is still an emerging market, and where you see growing competition, you are glad to know you are in a market that is growing », Nahum said. « One always likes to see there is competition when you are working on an opportunity.  Ultimately, what will make the difference is whether we can bring an assistance in performing these complex MIS procedures so they are easier and safer. And how well we deliver a specific patient value. »

He also notes that while all the major players are jumping into the robotic race, they are not all entering the same market segments with some focused on knee, others on spine, others on hip. « Right now the biggest and growing competition is for spine, where until recently all the focus was on knee surgery. We are seeing tough competition, but again, the outcome will be decided in the interest of patients », he said.

Asked about expected impact of robotics on the industry, on business models, Nahum offered the example of Nespresso coffee machines.

Just as we see today where implant manufacturers are locked in a commodity market, he drew a parallel with the market for coffee. « Everyone was selling beans, promising better flavor or richer aromas, but they were selling coffee beans. And before Nespresso, making a good cup of coffee was not so easy or efficient and not consistent.  You had to grind, measure, boil water, » he said. « Now you can take a coffee cartridge, put it in a machine and press a button. The experience is much simpler with far more consistent outcomes. »

Returning to the daVinci model, Nahum said it would be a mistake to look at the current penetration of MIS in orthopedics as a base for planning. Robotics will not take a share of the current market but will rapidly expand the adoption of MIS.

The daVinci robot very rapidly reached a level of adoption where it has become the standard. The U.S. expansion into MIS prostatectomy is tightly correlated to the expanding use of the daVinci robot.  In other words, he said, the market switched thanks to daVinci.

In other highlights from the interview, Nahum said:

* Now that the majors are onboard, it will make it more difficult for newcomers to jump into this market opportunity. Yet, this is a fast-moving space, so everything is still possible.

* The benefit to a hospital is not only that they can potentially perform more surgeries in the same time with robotic assistance. What we have seen is that because a hospital is known to have the MIS robotic procedures, they attract more patients. Patients today are very well-informed.  When they meet with their physician about a procedure, the patient already has an idea of what is available, what are the benefits of different techniques, and perhaps has a preference for a specific hospital.

* On the economic level, when you look at the cost of the robotically assisted procedure and then at the level of reimbursement, it is not clear that you are saving money. Yet there are so many daVinci robots being sold. Why? Because a hospital sees that acquiring a daVinci system also attracts a lot more patients and revenue.